Here are two approaches to emotional eating as she describes them:

… there are two kinds of compulsive eaters: Restrictors and Permitters.

Restrictors believe in control. Of themselves, their food intake, their environment. And whenever possible, they’d also like to control the entire world. Restrictors operate on the conviction that chaos is imminent and steps need to be taken now to minimize its impact.

Permitters find any kind of rules abhorrent. If they’ve ever lost weight on a diet, it was through wrenching, abject 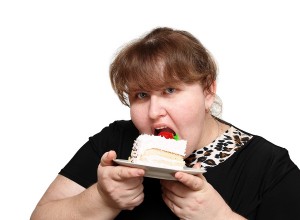 misery. They are suspicious of programs, guidelines, eating charts.

Permitters say, “I’ve gained fifty pounds in the last six months and I just can’t understand what happened.” Whereas a Restrictor operates with hypervigilence, with their antenna in constant motion like those of a sea anemone, Permitters prefer going though life in a daze. They way, they don’t need to feel pain—theirs or anyone else’s. If I’m not aware of it, there’s nothing to fix. If I go through life asleep, I don’t need to be concerned about the future because I won’t be aware of it. If I give up trying, I won’t be disappointed when I fail.

Like Restricters, Permitters operate on the need to be safe in what they consider hostile or dangerous situations. But unlike Restrictors, who try to manage the chaos, Permitters merge with it. They see no point in trying to control the uncontrollable and have decided it’s best to be blurry and numb and join the party. Have a good time. …

Restricting and permitting are subtypes of compulsive eating, which is the metadefense. A compulsion is a way to protect ourselves from feeling what we believe is unfeelable, what we are convinced is intolerable. It is a compulsion because we are compelled to engage in it. Because in the moment we are acting it out, we believe we have no choice. …

A few last words about labels. Everyone is both Permitter and Restrictor. A Restrictor turns into a Permitter the moment she binges. A Permitter becomes a Restrictor every time she decides she is going to follow a program, even if that resolution lasts two hours.

Both these types of emotional eaters feel compelled to eat and the compulsion is caused primarily by conditioning and to some extent by beliefs, as I explain in my eBook, The Secret to Ending Overeating for Good. http://emotionaleatingreport.com. For example, you will feel compelled to eat whenever you experience one of your specific triggers, such as loneliness, boredom, feeling unlovable, feeling anxiety, etc.

But it is possible for Restrictors and Permitters to de-condition their conditionings and eliminate their negative beliefs, reaching a peaceful state where their emotional eating is nothing more than a distant memory instead of a constant cycle of pain.